The fight between food and fads on the small screen

There are certain chefs who can get away with it. I don’t care that I can only make a handful of Rick Stein’s recipes. I switch on for his genuine exuberance and passion for perch. Shock, horror I don’t really like cooking most of Nigella’s nosh but I dare any man or woman not to be glued to her gorgeousness, the way she handles ingredients as if they were George Clooney’s squidgy bits. Despite his fame and fortune Jamie Oliver is often spellbinding with his boyish charm and his childish delusion that any of his recipes can be cooked in fifteen minutes. Not to mention the washing up.

Then there are the real try hards. Anyone subjected to ‘Good Chef Bad Chef’ would surely never enter a health food store again due to Janella’s pious platefuls and her obsession with ancient grains. It’s enough to have anyone reaching for a battered Mars Bar. Anything that involves competition and cupcakes I immediately switch off. ‘Cake Boss’ tries so hard to be zany but I’ll never make a wedding cake with a zombie theme and I’m not sure that I  fancy anyone near my fondant with piercings. For anyone not familiar with these shows –  thank god.

TV seems to be scraping the bottom of the beer barrel for good cookery shows. I haven’t watched a tv reality show since Alvin’s acclaimed appearance on Master Chef. Cookery shows should be for people who like food not fools. I’d rather watch Delia Smith instructing me how to boil an egg than anything involving mediterranean men standing around a barbecue pretending that anything grilled is gourmet.

Food and travel is some of my favourite tv fodder. We all like to be arm chair chefs as well as tourists. I always promise myself I shall make my own Vietnamese soups, attempt a whole roast pig or dive for scallops when I watch anything based outside Sydney. Food fantasies are allowed. Especially when they involve Rick Stein, a barge and beef en croute.

I could write about this forever as I do spend an inordinate amount of time watching Lifestyle Food. It’s a bit like joining a gym. All those good intentions to make green curry from scratch or bake a lamb in the back garden go out of the window when faced with the reality of really good frozen ravioli and an hour of ‘Game of Thrones’.

Cooking shows should not take themselves too seriously. I want passion not competition. I want mouth watering not mind numbing. Anything involving smoked tofu and quinoa should be shot from the screen. And Rick Stein, despite the age gap, please marry me on a small fishing boat, read me food poems and feed me lobster until I drop. 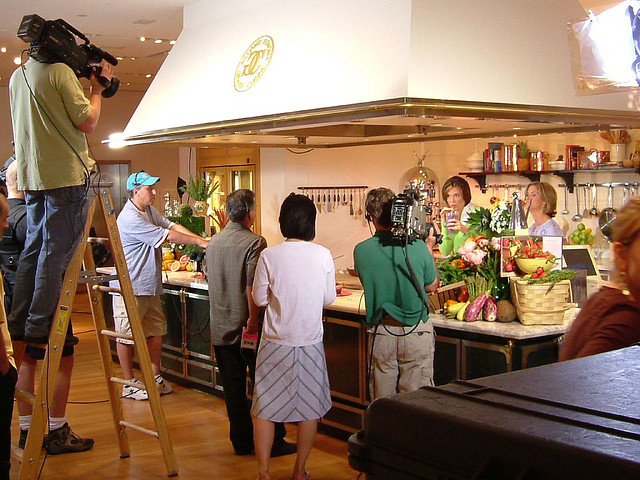 ← The French Do it Best
Fast Food Appeal →
Back to top ^